For my 100th club, I flew to St. Petersburg Florida. Kathy’s Duplicate BC is owned by Kathy Newell and runs on Wednesday’s at the St Petersburg BC. I arranged with Gretchen Funk and Leon Lyday to keep the second half of my purpose for visiting St. Petersburg a secret. Not only was I attending my 100th club, I was naming Charles Gill, manager of the St Petersburg BC, as the recipient of the Nadine Wood Volunteer of the Year Award. Charley is President, manager, part-time director, partnership chairman and he writes a clever email on the upcoming club happenings every week! He is a great guy and I wish every club had a Charley. To surprise me, Charley presented me with a caricature of yours truly in honor of my 100 clubs in 100 days. It is really just fabulous. We both pulled off a surprise!

Well I achieved the 100 clubs but I needed more. I decided to visit another club that was in somewhat familiar territory. In about 1973, I founded the South Jersey BC with two other guys and we had games seven nights a week. We introduced a day game and a game for players with less than 100 points. I sold my ownership after a couple years, but the club survived numerous owner and location changes. Today there is a club called the BC of South Jersey, so I think of it as a continuation of club I founded. This was my 101st club. They had 14 tables, and I played with Joelyn Shilliday.

So on September 21st, I completed club 99 and spent the next six weeks basking in failure. Now I have exceeded my goal and I did it in 97 days (no one ever said 100 clubs in 100 consecutive days). The tour was great. Thanks to everyone. Bridge players are nice.

Charles Gill, recipient of the Nadine Wood Volunteer of the Year Award 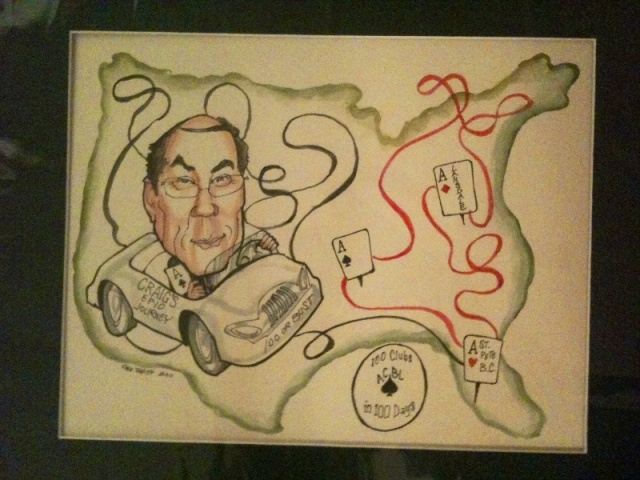 Sandpoint Idaho was just named the most beautiful small town in the United States by USA Today. The picture shown here is a downtown bank. The lakes, mountains, and beaches all add to the overall beauty of the area. Bridge is alive and well in the Couer d’Alene valley too. They have three games a week in the valley including one here in Sandpoint. Don Hanset directed the game of 10 tables, and I played with John Cox who traveled up from Couer d’Alene, some 30 miles away. The people were very nice, and I had conversations with as many as possible. John and I won. This is club stop #99. Elaine and I go home tomorrow, and I’ll have plenty of time to think about where to go for #100. I realized that today is September 21st which means there are exactly 100 days left in the year. Maybe I could do 200 clubs? Never mind.

‘It is not over til it is over’. I am going home now to think about where to go for number 100. We have had a great time and we would like to thank all the people at the clubs we visited. You were great. I enjoyed playing bridge everyday but I really enjoyed all the people I met. Bridge players are really nice. I drove about 18,500 miles and got to 37 states and two provinces.

Redmond Washington is a suburb of Seattle. Eastside BC is a really nice club that runs 19 games per week, including 4 limited games. The owners, pictured below, plus Mary Miller who was away on vacation, provide all the amenities a club should have. Matt Koltnow, a full-time ACBL tournament director, directs games when his schedule allows. Roger Putnam, another full-time TD, was playing today. I played with Maurice Blustein, an excellent player, and we coasted home, placing 1st in a 17 table game. After the game I met with the owners to suggest ways to help them with problems that may arise. But looking at the big picture, this is a fine club with all the ingredients for success. 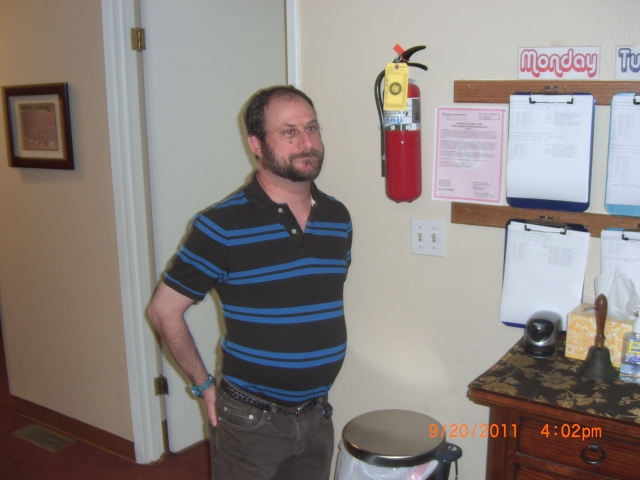 Vancouver British Columbia is a beautiful city. The club tour’s second trip to Canada brought us to the North Shore Bridge Club, a once a week club that meets in a community center. The center is an excellent facility for a bridge game. One of the owners, Sandi White (others are Steve Beaton and Tai Eng), is caterer in her real life. They had a spread that was set out at the beginning of the game (10:00AM) and consisted of roast beef, ham, and salmon salad, among a variety of other dishes. The game had 25 tables and I played with Ram Hira whom I had met in both Louisville and Toronto. He asked me to come to Vancouver and a second visit to Canada seemed a very appealing way to end my Western swing. As it turned out, this stop was #97, not #100. Elaine and I toured the city Sunday afternoon when we arrived, and Monday after the game. We were happy we got to visit Vancouver for the first time. 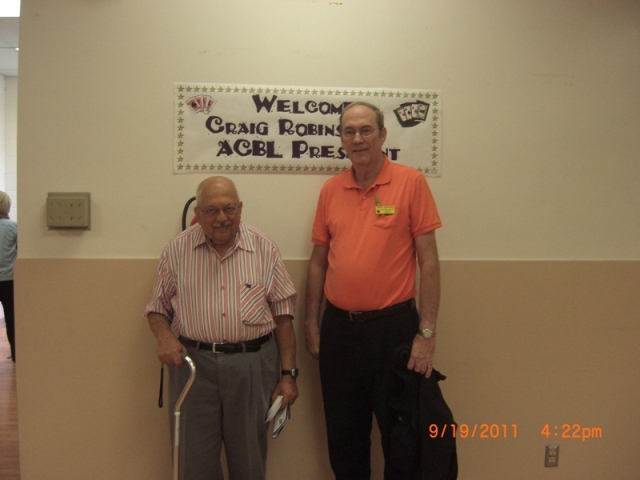 Club #96: East Side Bridge Club in Portland, OR

I came to Portland to visit a bridge club and it was closed. It seems the two full-time bridge clubs in Portland close when there is a sectional. Despite this, Molly Harris arranged to have a breakfast with the owners and directors of the Eastside Bridge Club and the Ace of Clubs Bridge Club so I could meet them all. It was good to see them all sitting at the same table (there are a lot of places I have visited this would be close to impossible to arrange). I tried to answer questions and tell of things I had learned. It was a very good meeting (as was the food). Later I played in the sectional with Jeff Taylor (former District 20 Director) in an attempt to inflate my masterpoint holdings. They had 56 and 42 tables in the Saturday sessions and we finished 5th and 4th overall and I won 7.14 masterpoints! I had dinner with the unit board between sessions and from my viewpoint it was a well spent day for stop #96.

Seaside is a small (6,000) town on the Northern coast of Oregon, about 85 miles from Portland. The town may be small, but it is big bridge-wise. The city hosted a 2000 table regional the following week. Sue Kroning has done so much to promote bridge in this community. She teaches and directs, and has built games from almost nothing to double digit tables. Today I played in a 13 table game. I partnered with Gerry Leenerts, who played well. We had a 61% game, which finished 3rd. Gerry’s wife, Gretchen; it should be noted, finished 1st E/W. After the game there was a very nice party at the home of Teresa Jefferson. The food was great, as was the view of the ocean and the town of Seaside.

Eugene is the home of the University of Oregon. The city has a very nice club that was recently remodeled. There was a lively discussion on a variety of topics which everyone seemed to enjoy. One question was, “what was the most embarrassing thing that happened to you on the tour?’ I gave them a hand that I went down 5, but that was a lie because the most embarrassing was about to happen in Canada. I held S-x H-Kxx D-KQxxx C-KJxx. My partner opened 1H, pass, I bid 2D, then 2s by LHO, and 4H by partner, pass, now what? Well I found the worst answer and my most embarrassing moment. First I bid 4NT, and my partner bid 5 spades. Oops. You can’t bid 4NT playing key card if you can’t stand the answer of 2 plus the queen of trumps. As if 4NT wasn’t bad enough, I was so upset with what I had done, I passed 5 spades and my poor partner had to play in his 3-1 fit in their suit! Jeff Taylor and I did manage to win in Eugene while Elaine played with Mary Egger and finished 3rd. I had a fun time at a very nice club. 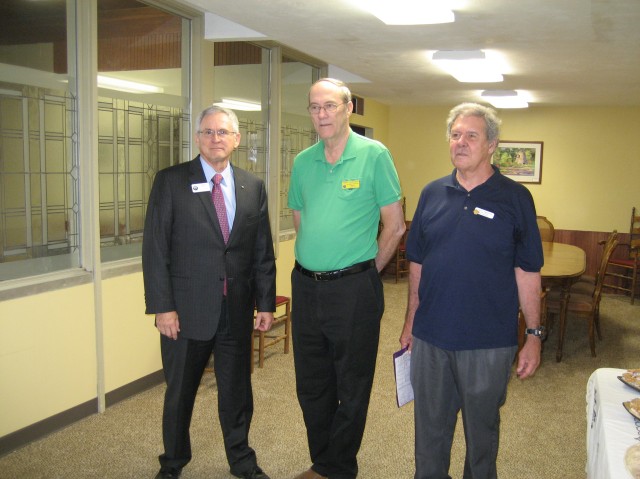 Eureka is a small town in Northern California on the coast. The Sequoia Bridge Club meets three times a week in a church. The games were small, 4 ½ tables, the day I was there, but the players love the game and are happy there is a game at all! I played with Ginger Bowes, a new life master, and a very enjoyable partner. We did pretty well, 3rd I believe. I know these small games exist all over ACBL land and I am concerned about the future of these games. It is very difficult to get new players into games when the population density is low. This is largely due to the fact that it’s difficult to find someone who feels it is worth their effort to teach bridge to a very small number of people (1 or 2). Without teachers, we don’t have new players. It appears to me to be a serious problem that lacks an easy answer.

Bruce Blakely had been hosting us the last two nights. Today Bruce drove us over to Oakland to play in a community center where they had about 25 tables. Like many morning games, they work in a break for food and there was an enormous strawberry shortcake. The game was directed by Betty Kael who did a very good job considering there were two sections and she was playing to boot. I played with Tom Pajak who gave some assistance to Betty with technical problems during the game. Tom was very enjoyable to play with. We had some bad luck and scored OK, but nothing to write home about. The club held a question and answer session with the members and myself, and I really enjoyed giving answers and speaking to everyone. We left immediately after the game to start the long drive to Eureka.

Today’s stop held an evening game with three sections (Newcomer 5 tables, 0-299 15 tables open 10 tables), 30 tables and no parking! The newcomer game had a lecture before their game on the stage in the basement of the church facility. The Newcomer game finished early and they cleaned up and left without disturbing the other 25 tables. I played with Robert Hartman, the new CEO of the ACBL and we managed to win. Elaine played with Steve Smolen (the brother of the man who invented the Smolen convention). They had a 57% game and finished out of the money. That is the second time this happened recently (isn’t that very rare or am I just whining?). Anyhow, it was a very enjoyable game at a very spectacular show of evening bridge. My presence didn’t exactly pack them in. There is always a good crowd at evening bridge here. The same game had 29 tables the following week.